We have an essay winner! 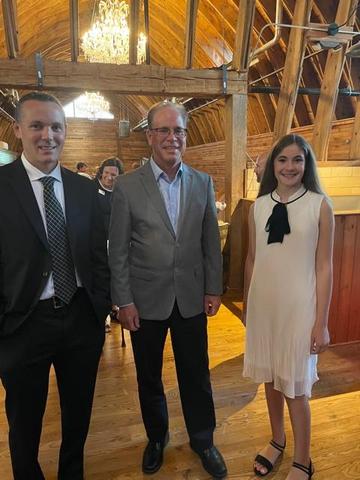 
For Oak Farm Montessori Middle School 7th grader, Lily Morris, the idea of entering a writing contest sounded fun. Her Language teacher offered the students extra credit for submitting an essay and Lily thought that only sweetened the deal!

Noble County students in grades 7th - 12th had the opportunity to submit essays on the topic, “Why did the founding fathers consider it necessary to incorporate the concept of division of powers in the Constitution?” After studying Government and its branches for the last semester, Lily felt confident about checks and balances. Lily shared, “I learned a lot from my Humanities Teacher, Jon Agler, and then I applied that to my writing work in Language.”

Being chosen as one of the top four finalists was exciting for this articulate young lady. “Getting to sit at a table with Senator Glick was pretty cool!” As the winner was announced, Lily felt her dad nudging her…”Get up there!”  It had never really occurred to Lily to think that she would win with her first submission to a writing competition.

Senator Mike Braun greeted her on the stage to congratulate her and extend the award. After he read her essay aloud for the crowd of attendees, Lily had several photo opportunities and words of encouragement from others.

And what about that extra credit in Language? Well, her Humanities teacher decided to double the award and give her additional points in Humanities as well. Congratulations Lily! You exemplify the portrait of an OFMS graduate through your leadership and pursuit of life long learning.